Please place an order and choose the delivery date. Dismiss

In this article, we will present you our methods of raising and holding the drones in our bee colonies

Due to the reason that our mating program extends over almost 6 moths, to make sure the success of our matings, we are obligated to create a flood of mature and good quality drones in our mating station.
Colonies that participate at this process are carefully selected in the season before and their evaluation is made after the well-known criterias:

•  kindness
•  honey yield
•  colony development for first honey flow
•  the absence or low tendency in swarming
•  disease resistance
•  calmness on comb
•  fast growth of honeycomb
•  quality and speed of honey capping
•  hygienic behavior
•  ability to winter
In this way, we use drone-comb frame which we introduce in the middle of the colonies by following:
Usually, after five days, there are eggs and larvae in the first comb, which is moved above the queen excluder(Langstroth hives) and a new drone-comb is introduced in his place.
In case the first comb is not full with eggs and larvae, it means the colonie has no natural disposition to raise drones. To fix this, we must suppliment with frames of capped worker brood from other colonies and repeat the process.
The first comb is introduced 40 days before grafting, meanwhile this, we feed the colonies with syrup to encourage the bees to built the comb and the queen to lay.
This process is repeated every 5 days until the participating colonies receive maximum of 4 likewise combs. In case one colonie is not strong enough to support this level of drone production, either, we stop at a smaller number of combs or we help with frames with capped brood from other colonie.
Because the queen excluder is there to separate the 2 bodies, the bees will feed the drone larvae from the body above, while the queen will be stimulated to keep laying eggs in the newly introduced drone-comb. Now the colony is in a raising drones cicle.

We also have a program of body reversing, specific to this process, which allows the queen to lay and mantain a large population. Once again, we mention that without constant feeding, raising drones using this method is NOT POSSIBLE.
Once capped, just before hatching, the drone-comb can be moved in another location, where is necessary, or we can keep it in the same mating station and a new comb taking its place in this cycle.
Therefore, we move to the second stage which is building the Drone Holding Colonies
These colonies are structured accordingly:
•  2 frames with honey and pollen
•  5 frames with worker capped brood
•  3 frames with drone capped brood
•  a sufficient number of bees to cover all this frames
•  a virgin queen in the cage
We interpolate the frames with drone capped brood through the ones with worker capped brood keeping the ones with honey and pollen at the borders. Abundance of food is essential in these colonies as well as we insure that the almost 6000 drones: which will hatch will have optimum growing conditions.
In this situation, the newly created colonies are in natural conditions of holding and feeding the drones: without restraining their number.
We will create as many of these colonies as necessary to obtain the saturation of needed drones according to the number of the mating nucs we have in our isolated area.
Throughout the years we noticed that in the mating station, queens  coming back from their mating fly were attracted and easy accepted by this kind of colonies. Therefore, we decided to use a queen excluder for bee entrance until the mature period of the drones is getting closer.
After finishing this process, the virgin queen from the cage is suppressed because is too old to correctly mate and, before it’s not too late, these colonies will receive a mated queen, while their place will be taken by other newly created.

So, we manage to create new colonies also to raise and hold good quality drones in our mating stations throughout the year.
As for now, we are obliged to ride tens of kilometres to avoid our neighbours drones which are of bad quality and come from unselected queens.
With all these, a great wish of ours, represents the fact that the majority of beekeepers, using the upmentioned system, try to make a full selection, also on ”father colonies” not just on ”mother colonies” because, only this way the quality of genetic material can be enhanced. Even if the proportion of your drones is not sufficient to cover the entire area, good results will be visible starting following year already. Also, if you have beekeepers as neighbours which are not practicing the „artificial selection based on the performance”, nicely ask them, when forming new collonies, to accept queen cells from you. This would be a HUGE step ahead for both of you.
Click here to see how we manage the controlled mating of Buckfast Queen Bees
Click here to see how to introduce a queen bee from a different race in a colony 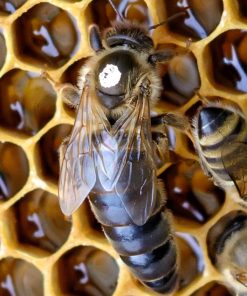 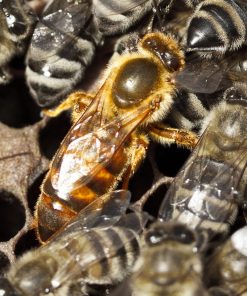 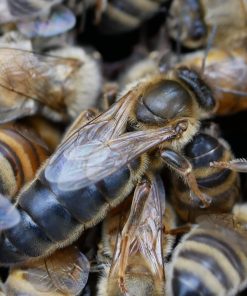 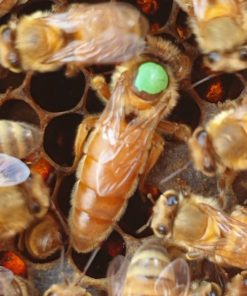 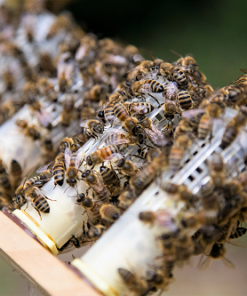